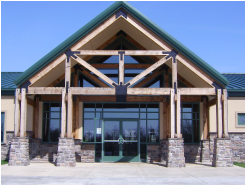 The shelter building sits on ten acres of land donated by Ruby S. Vella. The original building was built in 1960, and small additions were made to the existing building over time, along with satellite buildings for storage, etc.

In 2005, a capital campaign committee was formed to raise the money necessary to build a state-of-the-art facility to replace the aging, crowded buildings. Operations were moved to the new facility in September of 2009, and the organization’s name was changed to the Humane Society of Southwest Missouri.

OUR MISSION
The mission of the Humane Society of Southwest Missouri is to aid in the alleviation of distress and suffering of animals by operating a shelter for animals in need of care, placing animals in suitable homes, and offering educational programs that promote animal welfare.
Read more:
Support Us